The Ancient Order of Hibernians (AOH) is a Catholic, Irish-American Fraternal organization founded in New York City in 1836.  The Order traces its roots to a parent organization of the same name, which has existed in Ireland for over 300 years.  The AOH evolved from a need in the early sixteen hundreds to protect the lives of priests who risked immediate death by keeping the Catholic Faith alive in an occupied Ireland after the reign of England’s Henry VIII.  When England implemented the dreaded Penal Laws in Ireland, various secret societies were formed across the country.  These groups worked to aid and comfort the people by whatever means available.  Similarly, the Ancient Order of Hibernians in America was founded at New York’s St. James Church to protect the Catholic Church, its clergy and people from the “No Nothings” and their bigotry-filled followers.  Around the same time the vast influx of immigrants fleeing tyranny in their own land and the subsequent Famine Years prompted and unparalled growth of social societies in the USA - the largest of which was, and continues to be, the Ancient Order of Hibernians.

The Ladies Ancient Order of Hibernian (LAOH) was organized in Omaha, Nebraska in 1894 as the “Daughters of Erin.”  The organization pledged itself to God and country.

The primary purpose of the Ladies group was to protect young immigrant Irish girls coming to the United States, to assist them in securing employment, to give them the opportunity to be with their own kind and to keep them from becoming homesick and discouraged.  The many divisions and club facilities located throughout the U.S., traditionally have been among the first to welcome new Irish immigrants.  Here, the Irish culture - art, dance, music and sports are fostered and preserved.

The motto of the Ladies is: “FRIENDSHIP, UNITY AND CHRISTIAN CHARITY.”  Our Patron Saint is Saint Brigid.

The Ladies are formed exclusively of practicing Catholics.  Each member shall receive Holy Communion once a year, from Easter Sunday to Trinity Sunday.

Today, Hibernians are primarily a Catholic Action group.  Our work in the beginning was the defense of our Holy Faith.  Today, our work is the propagation of the Faith.  Our work in the beginning with respect to Ireland was to defend our people against the prejudices and slander of bigots.  Today, our work is to keep before our country and the world, the fact that the Irish and their descendants are foremost among the people of the world in Faith, in patriotism, in a sense of justice, in the spirit of self-sacrifice in their love of true liberty and peace.

To those women of our Creed, who subscribe to our principles, aims and purposes, we extend a cordial invitation to join our ranks. 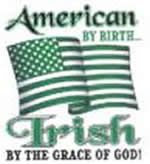